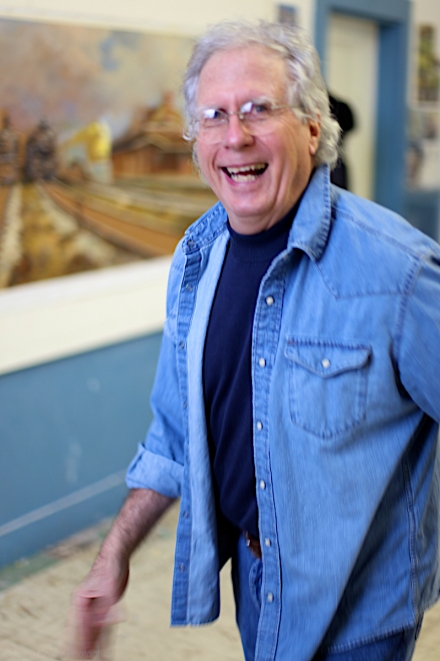 Bath, ME—Last week I had the pleasure of photographing artist John Gable at his studio in Bath.  I’ve wanted to meet Jack for literally 27 years.  Yeah, I know.  I’m a little slow but I do eventually meet my goals.  Jack used to live in Kennebunkport when I was growing up here as a kid.  And my first introduction to him was not his beautiful artwork….but his Shelby Cobra sports car.  I used to see him drive it around town (I was 14 at the time) and boy did I love that car.  It was only later on that I learned the owner was John Gable.  I’ve always loved his work and have three of his prints in my home.  My two favorite are Keith McClelland at Consolidated School and Emmy in front of Allison’s Restaurant.

John has a HUGE studio directly above Reny’s in Bath.  He explained, “I need a studio this large because of the murals he’s commissioned to do for clients.”  He showed me one that was 102′ long for a restaurant in Washington, DC.

I spent an hour and a half with Jack and we were both amazed to learn how many connections we had.  We both knew many of the same people, had some similar life experiences and even wear the same watch–how weird?

Jack has agreed to participate in my upcoming exhibit, Mainiacs, and I’m honored to have him as one of my subjects.  If you want to view some of his fantastic work click here.