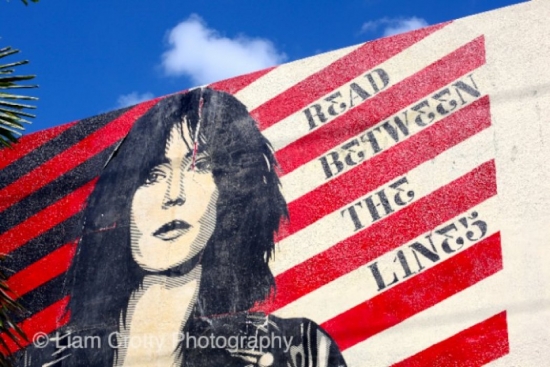 Yesterday I attended the Wynwood Graffiti by Bike Tour through Miami and was amazed at how much really great public art is taking place in downtown Miami. The event was a collaboration of a few groups and individuals, specifically Emerge Miami (an activist network group) and Miami Open Streets (a bicycle advocacy group) and Meetup Critical Mass. 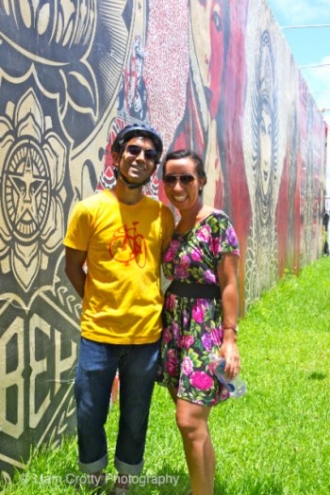 And the tour was led by the extremely knowledgeable event creators, Olga Cano and Dario Gonzalez. Dario and Olga took turns guiding our group (110 people showed up for this on a hot and humid Saturday morning) as we proceeded to bike 9 miles through the streets of Miami. They had previously chosen some of the best graffiti art and created a route and map and as we biked the route Dario and Olga would describe some of the work and the artists.

I’ve included 45 images but this is just a tiny sampling of what is downtown–I doubt I photographed even 1% of what we saw. And if you are wondering about the legality of the art, it was explained that all the art we were viewing was legal and the building owners had “donated” the space for the artists to do their work. I was very impressed with the organization of the public art and the bike tour itself. I learned more about the public art scene in Miami in 4 hours than I had in the last 6 weeks. 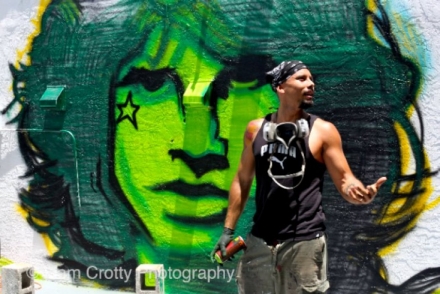 One of the highlights of the tour was a planned stop to meet and listen to graffiti artist DEXOS a.k.a Alexis Samaniego while he worked on his current commission, a great rendition of Jim Morrison.

We concluded the bike tour at one of the most popular public art spaces in Miami, the Wynwood Walls which is a collaboration by Goldman Properties and Deitch Projects. If you want to choose just one public art wall to view graffiti art, this is the one. I was pleased to see some great work by Shepard Fairey (I had seen his excellent exhibit this past summer at the ICA in Boston).  Beautiful work and well maintained.  And a final mention to Primary Flight , an organization that has served as the main outdoor art curator for Wynwood since 2007.

I highly recommend checking out the Miami public art scene!

(These are all low-resolution images for quick uploading and viewing)