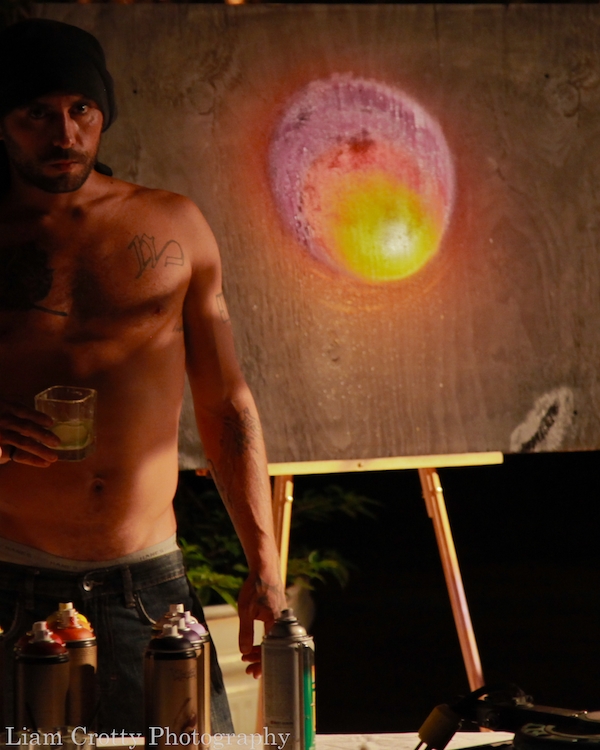 Thursday night I photographed a VERY COOL party at The News Lounge in Miami.  It was the 3rd kickoff party for the ANIMIAMI Animation Festival and Conference which will take place on October 16-17, 2010 hosted by Miami International University of Art & Design’s downtown Miami campus.  If last night’s party is any indication of what the conference and festival will be like…sign me up!  I told the hosts I was impressed with how “multi-dimensional” the party was.  There was live, interactive animation with artist SPACE Y MI Crew; live music by Fusik (Mack Moore, Anton “Sanchez” Rivera, Charles “Chip “Gardener, Andrew “Non MS” Mujica, Daniel “Felix” Garcia) preceded by DJ V and DJ Manuvers; and continuous content on the big screen with speakers and info about the upcoming festival. Two of the key sponsors of the party were: Miami’s Independent Thinkers (Kerry McLaney, Laraine Hart, Sara Read and missing was Sara’s identical twin Heather who was out of town partying in Ibiza) and I am your villain. I got to the party and Alicia Triana with I am your villain gave me a tour of all the key players and what was happening; introduced me to Mauricio Ferrezza, the CEO and founder of ANIMIAMI, and the COO and founder Ricardo Bandeira; Spencer Morin with Miami World Cinema Center “the first non-profit film studio, based in Miami supported by the community and dedicated to local talent”; the manager of The News Lounge, Cesare Mazzoli, was there to greet guests;  many volunteers helped with the event including: animator Thomas Seigido, script writer Carolina Sbaile, animator Lazaro Santana, character animator Jakejames Lugo, volunteer coordinator Cristine Figueroa, animation artist Artyom Aleksanyan.  And Miami’s Independent Thinkers’ volunteers: Tammy Zstatik and Bianca “Miami’s It Girl” D’An.  Audio and video for the party were managed by Marc Nazario. Joel Meinholz with I am your villain was taking photos. Representing Wynwood Radio were Adrian and daughter Eliana, Vicente Solis, Ilana Sod who also does work for MTV Latin America. And just a few of the guests included Tanya VanOort broadcast designer and Ricardo Barros senior broadcast designer with Gala Vision, Cynthia Beauclair art director for Tropic Survival, The Closet Queen Beth Levin, financial broker Guy Ramsey Jarret, Sara and 2-year old Sam Kaplan, Walter Lucero, Eleanor “Wok Star” Hoh, Univision’s art director Cesar Sakay and Lori Sakay, and actor, singer, dancer Michelle Domb and Gil on the swing……yes, just Gil.

All images on my website are available for purchase as prints, enlargements or high-resolution downloads, please email me about my online ordering system.

If you would like a photo of you “tagged” so you can post it as your Facebook profile picture, simply send a friend request to me, Liam Crotty, and I’ll friend and “tag” you.