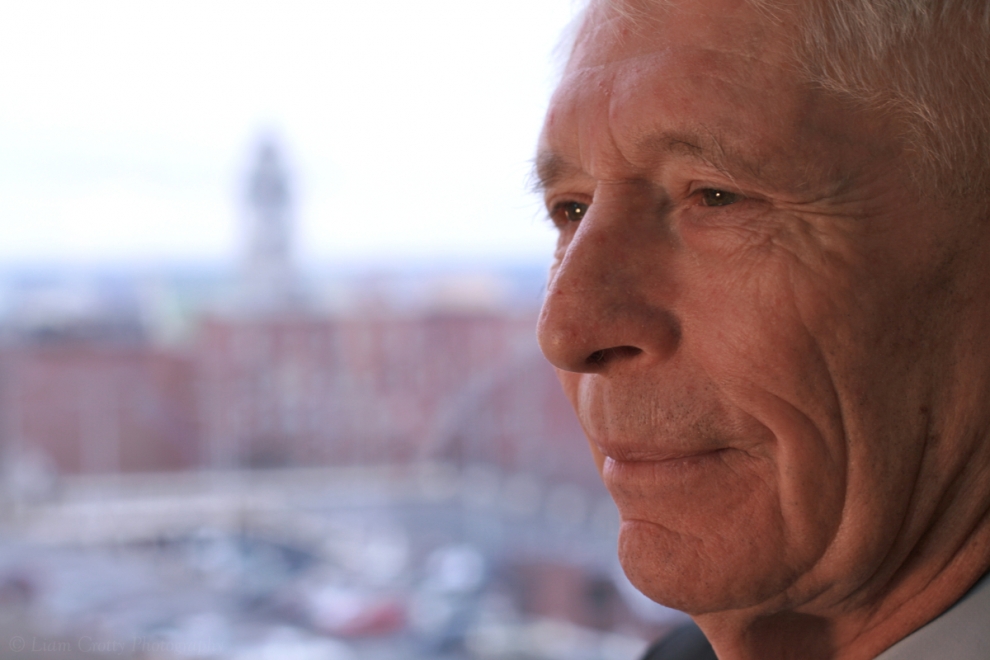 Portrait photographer Liam Crotty has been creating a series for an upcoming exhibit entitled “Maineiacs – portraits of prominent Maine leaders and why they love our State”. His current portrait subject: Kenneth M. Curtis, Governor of Maine from 1967-1975.

Curtis now lives in Siesta Key, FL, but had traveled back to Maine where he is a He is currently a principal in the law firm of Curtis Thaxter Stevens Broder & Micoleau Limited Liability Company, P.A.. Crotty photographed Curtis in the Portland offices.

Between takes, Curtis found himself gazing over the Portland view from the conference room window and reminiscing about not only the many years he served in Maine, but his rather unique start in the business world. In 1956, his first summer after leaving law school, he and a friend had a money-making idea – to lease a donut shop in Wells on Route 1. Mrs. Curtis commented, “I will never forget that summer!  I would work all day at Sears, and then go to the donut shop and work all night. But let me tell you, Ken can make a great donut.” That so-called money maker turned out not to be, and Curtis realized he should stick to law and politics.

Born in Leeds, Maine, Kenneth M. Curtis has served in the United States Navy, rising to the rank of Lieutenant Commander, as Secretary of State of Maine from 1965-1966, then as the Governor of Maine from 1967-1975. A Democrat, he also served as the Chairman of the Democratic National Committee from 1977-1978 before going on to become the US Ambassador to Canada from 1979-1981. More recently, Curtis served as the President of the Maine Maritime Academy, his Alma Mater.

Curtis is now semi-retired and is living a much more causal lifestyle than during his more active years of political service. During the portrait session, Curtis cautioned Crotty, “Now I want you to know.  This is only the 2nd time this year I’ve put on a coat and tie!  Down in Siesta Key, people don’t wear them!”

Photographer Liam Crotty is in the process of shooting portraits of over 20 prominent “Maineiacs” for his upcoming exhibit. A skilled photographer and lover of his native Maine, Crotty’s exhibitions include “Finding Norman Rockwell’s Small Town America” and “Faces of the Kennebunks”. For more information about the upcoming exhibit “Maineiacs – portraits of prominent Maine leaders and why they love our State” email liamcrotty@aya.yale.edu