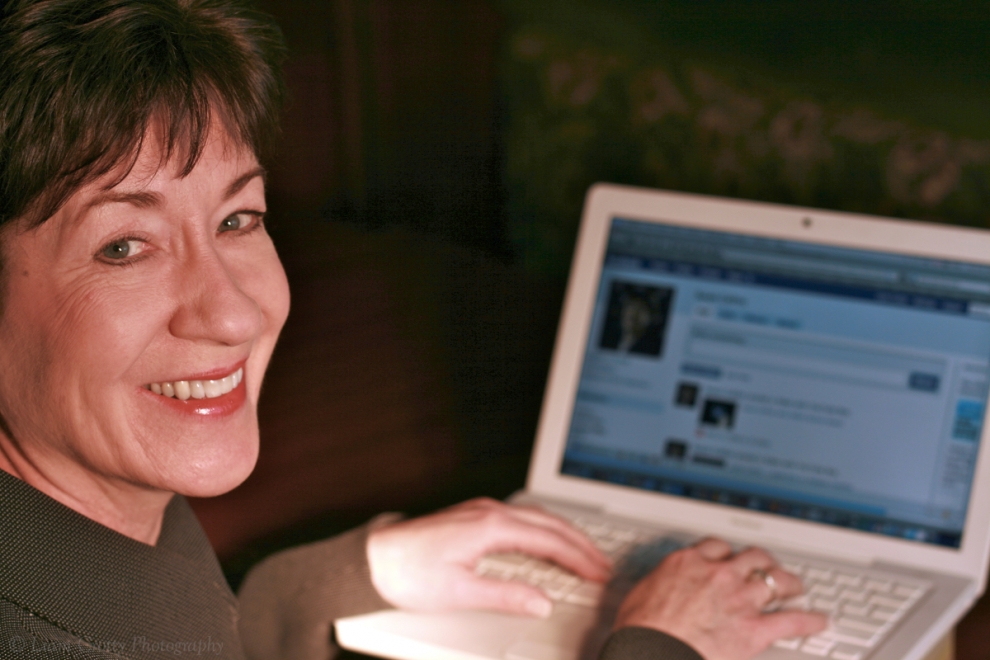 U.S. Senator Susan Collins (1997-present) is no stranger to the power of the Internet and social networking. Even on a busy day attending a CLIMB (Christian Leaders in Maine Business) breakfast at the Marriott Sable Oaks in South Portland, and needing to rush back to Washington, she took time to check her Facebook account.

Inspired by the Senator’s understanding of the power of Internet communication, portrait photographer Liam Crotty photographed her at her computer for a fresh and lively slice of Senator Collins’ working day. Senator Collins uses social networking sites such as Facebook and Twitter, as well as blogging to keep her constituents informed about the work she is doing for them in the nation’s capital and around the world. Her social networking accounts are packed with updates, videos of speeches and other information to interest the “Mainiacs” back home.

A born Maine native, Senator Collins graduated Phi Beta Kappa from St. Lawrence University, after which she went to work for Senator William Cohen. In 1987, she became the chair of the Maine commission on financial regulation and was the Republican gubernatorial candidate for Maine in 1994. In 1996, Senator Collins won her seat after a difficult three-way race. In choosing two words to describe working with Senator Collins, Liam Crotty picked “gracious” and “class”.

Photographer Liam Crotty is in the process of shooting portraits of over 30 prominent “Mainiacs” for his upcoming exhibit. A skilled photographer and lover of his native Maine, Crotty’s exhibitions include “Finding Norman Rockwell’s Small Town America” and “Faces of the Kennebunks”. For more information about the upcoming exhibit “Maineiacs – portraits of prominent Maine leaders and why they love our State” email liamcrotty@aya.yale.edu