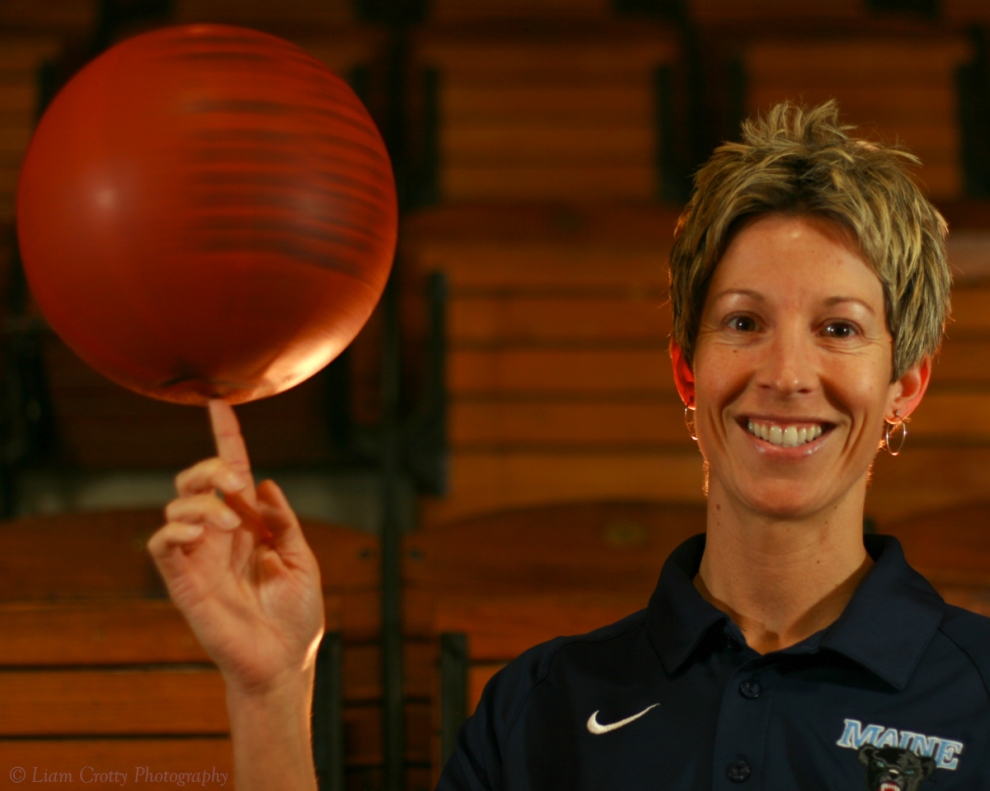 Here’s my portrait I did of former WNBA player and current UMaine women’s head coach Cindy Blodgett.  For those of you who haven’t heard of Cindy, she is literally a sports legend in Maine.  Her amazing basketball accomplishments are well described in Wikipedia so I’ll just mention the highlights: She led her high school team to a four-year career record of 84-4. Throughout that four year period they won four state class A championships.  How many people do you know have a biography written about them while they are still in high school?!  Tabitha King published the nonfiction PLAYING LIKE A GIRL: CINDY BLODGETT AND THE LAWRENCE BULLDOGS SEASON OF 93-94.  A four-time Kodak All-American, Blodgett became just the second woman in NCAA Division I history to lead the nation in scoring for two consecutive seasons, averaging over 27 points per game in her sophomore and junior years at Maine. She finished her career with 3,005 points, breaking a total of 20 school records. She led Maine to its first four appearances in the NCAA Basketball Tournament in the school’s history. Blodgett earned a Bachelor of Science degree in Elementary Education from the University of Maine, graduating cum laude. After graduating from college, she was selected by the Cleveland Rockers of the WNBA in the first round (#6 overall pick) of the 1998 WNBA Draft. After spending one season with the Rockers, Blodgett was traded to the Sacramento Monarchs.  Her hometown of Clinton, Maine dedicated a public park in her honor.    Her tremendous accolades have made her a heroine across the state of Maine.
Please note, these are low resolution images for quick uploading and viewing and all images from my website are available as high resolution downloads, prints or enlargements, etc.  To view a slideshow of the images, please click on the blue text that says, “View with PicLens.”

I photographed Cindy to include her in my on-going project and upcoming exhibit: “Maineiacs: Portraits of Prominent Mainers” — a project that I am still working on whenever I go back to Maine for a client photo shoot or for vacation.

There’s a funny story I tell about my portrait session with Cindy.  Her assistant sent me to the gymnasium to meet Cindy and I got lost trying to find it.  Going down a staircase I ran into one of the UMO’s team players who told me how to get to the gym and of course, who showed up for the portrait?  Yes, it was the “player” in the staircase!  I made the mistake of thinking she was one of the players!  Oopps!  Cindy laughed it off and said it wasn’t the first time someone confused her as a player instead of the head coach because she has a very youthful appearance.

One of my other on-going projects is doing portraits of “Interesting, Accomplished & Prominent People” and some of these portraits find their way into my exhibits.  If you personally know an “Interesting, Accomplished or Prominent” person and would like to recommend them to be photographed by me and included on my website, please send me an email.